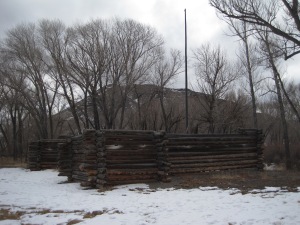 Recall that yesterday, Spanish lieutenant Ignacio Saltelo had arrived at Pike’s stockade and ordered Pike and his men to Santa Fe. Pike conceived that Saltelo was to accompany him, but he is now in for a surprise.

27th February. Friday. In the morning I discovered the Spanish lieutenant was writing letters addressed to the governor and others; on which I demanded if he was not going on with me to Santa Fe. He appeared confused and said no: that his orders were so positive as to the safe conduct and protection of my men, that he dare not go and leave any behind; that his companion would accompany me to Santa Fe with 50 men, whilst he with the others would wait for the sergeant and his party. I replied that he had deceived me and had not acted with candor; but that it was now too late for me to remedy the evil.

There are several things going on here. One is that commander Saltelo is not going to accompany Pike. Rather, he is sending Pike on with a detachment of his men, while Saltelo and the rest of his men wait at the stockade for the Americans Pike has left in the mountains. Pike now realizes his trip to Santa Fe is not a temporary junket to meet the governor and return but a permanent detour into New Spain (Mexico). Pike will later maintain that he had not made just one expedition, but two—one planned, from St. Louis to the Rocky Mountains, and one unplanned, through northern New Spain. Accordingly, he begins his diary anew today, giving it a new title and labeling it “Part II.”

There is also the question of his men in the mountains. He has left five of them behind—Baronet Vasquez and Patrick Smith on the Arkansas River near modern Cañon City, when he conceived the horses unable to go on; John Sparks and Thomas Daugherty in the Wet Mountain Valley, when frostbite rendered them unable to walk; and Menaugh, who gave out in the snow on the eastern side of Medano Pass. Pike has sent sergeant Meek and private Miller to rescue them, but the party has not returned. He leaves some money and instructions to comply with Saltelo’s orders. The rescuers will return to the stockade soon and will follow, under military escort, a few days behind Pike, until trouble breaks out between Meek and Miller.

We marched about 11 o’clock, ascending the Rio del Norte [Conejos] five miles more S. 60 [degrees] W. when we went round through a chain of hills and bore off to the south. We proceeded on nine miles further, when we crossed the main branch of that stream, which was now bearing nearly west towards the main chain of the third chain of mountains. We encamped on the opposite side. Distance 15 miles. Intensely cold, obliged to stop frequently and make fires. Snow deep.

Counterintuitively, the Spaniards escort him upstream, away from Santa Fe. This is the path that Dr. Robinson had followed a few weeks earlier, mistakenly believing he was on the Red River and that he needed to head southwest to get to New Mexico. Downstream of Pike’s camp, however, the Rio Grande cuts through volcanic formations to carves a series of deep impassable gorges. The best route to Santa Fe from the Conejos, then, is upstream and around, to rejoin the Rio Grande further south. Pike and Robinson had no way to know such intricacies of the local geography, so Robinson ended up getting where he wanted to go by going the wrong way.