Pikes Peak from confluce of the Arkansas and Fountain Creek

Pike summited a mountain, but it was not Pikes Peak. Which one was it?

He drew no map of his climb. Consequently the answer has eluded historians for two-hundred years. Thanks to some enterprising researchers, I think we now have an answer.

On November 24, 1806, Pike left most of his party at the confluence of Fountain Creek and the Arkansas River, near modern Pueblo. He took three of his companions, Dr. John Robinson, Private John Brown, and Private Theodore Miller, and headed for Pikes’ Peak, which he called the “Grand Peak,” more than forty miles away. On the 26th, they entered the mountains, ascending a drainage near what is now Fort Carson Colorado, south of Colorado Springs. They hiked all day, and came to a small cave where they took shelter for the night, and resumed their climbed the next day. Within an hour, they reached a summit from which they could see the Grand Peak and the plains. Abandoning hope of reaching their goal, they turned around and went back to their party.

In 1895, the first scholarly editor of Pike’s journals, Elliott Coues, suggested Pike had climbed Cheyenne Mountain, the humped promontory rising from southern Colorado Springs, today adorned with communication towers. Pike’s first academic biographer, Eugene Hollon agreed in 1949. Although Cheyenne Mountain has since entered regional lore as Pike’s terminus, it seems a highly unlikely suspect. Marching from the Arkansas, Pike would have seen Cheyenne Mountain as considerably out of his way, an unnecessary detour to the northeast—a path he had already eschewed by departing his initial

Map Pike drew of his route to the base of the mountains (available at zebulonpike.org)

northward route along Fountain Creek and instead diagonaling northwest to the mountain front. Moreover, Cheyenne Mountain can be climbed in a few hours, which does not square with Pike’s description of the arduous all-day climb that still did not deliver him to the peak.Other scholars have posited Black Mountain or Blue Mountain as possibilities, but neither offers a view of Pike’s Peak, which Pike said he could see from his summit. The most thorough editor of Pike’s journals, Donald Jackson, maintained that this does not invalidate Blue Mountain. Blue does offer a view of Almagre Mountain, which sometimes resembles Pike’s Peak and which Pike might have mistaken for his Grand Peak. This seems unsatisfying, however. It relies on the assumption that Pike was in error, an assumption for which there is no direct evidence. Pike had been following the peak for eleven days by this point, and it would remain in his sights for much of the next month and a half. It is reasonable to believe a man eyeing the peak with such interest for so long knew what he was talking about when he said he saw it from the summit of a lesser peak. Jackson chartered a plane and traversed the region from the air, which, in his words “proved absolutely nothing,” and then threw up his hands and let the mystery stand.

Inspired by the bicentennial of the western expedition, Pike enthusiasts in Colorado took up the problem with renewed vigor in the early twenty-first century. They came up with a highly credible—in my opinion nearly certainly correct—answer. Among the first to guess at the answer was Glenn Scott of the USGS, whose 1975 Historic Trail Maps of the Pueblo 1×2 Quadrangle, Colorado depicted Pike’s route with a question mark. The credit for erasing the question mark three decades later goes especially to John Murphy, a retired Colorado Springs attorney, who attacked the question as a lawyer—“which mountain had enough evidence to convict it?”

Murphy first got interested in the question in 1985, when he learned of Scott’s map. He began by climbing peaks from various directions, looking for plausible routes and topographical features that matched Pikes descriptions in his journals. According to those journals:

• The mountain must have a view of both Pikes Peak and the plains;
• A party of four men in good shape, whose ages vary from 20s to 50s must be able to reach it from a drainage at the front of the mountains within the roughly ten hours of daylight available on November 26. But it must take them all day to do it;
• It requires at times a “nearly “perpendicular” climb;
• Somewhere on its slope, it needs to have a cave big enough to sleep four men;
• The cave needs to be about one hour from the summit;
• Pike said it was 15 or 16 miles from Pikes Peak.

Starting with these clues, Murphy and his companions began climbing the mountains south of Pikes Peak. Murphy selected fit 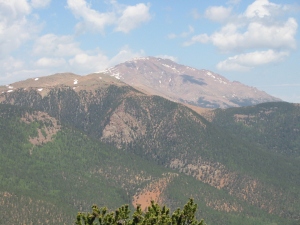 hikers, to match Pike’s men, whose march from St. Louis would have left them lean and strong, and he scheduled their climbs to replicates the wintry conditions under which the explorers had labored. Climbs by Armando Lee, Cody Kreamer, and others ruled out Cheyenne Mountain, Gray Back Peak, Black Mountain, Blue Mountain, and Mt. Miller, all of which could be reached in six hours or less and many of which failed other tests when compared to Pike’s journals. The one that best fit the distance and difficulty Pike described was Mt. Rosa, at 11,499 feet in elevation and more than eight hours from the base camp.

Independently around this same time, Frank Sanders, another diligent and creative Pike enthusiast, approached the problem from a different angle. He rotated and scaled the sketch Pike drew of the route from the Arkansas to the base of the mountains and overlaid it onto modern topographical maps. And he found a good fit, locating Pike’s base camp on Colorado Highway 115 near the mouth of Little Fountain Creek, the same place that Murphy and Glenn had guessed. Using U.S. Department of Commerce shadow plots showing sight lines in the area, Sanders determined that there are only three summits Pike could have reached from that drainage in one day that also afford views of both the plains and Pikes Peak. In ascending order of elevation and proximity to Pikes Peak, they are: San Luis Peak, Mount Rosa, and Almagre Mountain. San Luis is too far west. Climbing it would have taken Pike off his route toward the Grand Peak, something he does not mention and which there would have been no

reason to do. Almagre is in the right direction, but it’s a haul. The furthest and highest of the three, it is doubtful Pike could have reached it in one day unless he used quite a bit of darkness, which seems unlikely and which he does not mention. In addition, Pikes Peak is only three mils as the crow flies from Almagre. Could Pike have mistaken three for fifteen?

If Pike had climbed up Little Fountain Creek trying to keep the most direct route toward the Grand Peak, he would have reached the slopes of Mount Rosa late in the afternoon. He had not seen Pikes Peak all day. Mount Rosa loomed directly in the explorer’s way, an inviting promontory for someone wanting to get a view of the lay of the land. Its nearly perpendicular face, however, blocked their assent. They would have started contouring to the east, then back to the west to ease the grade.

In January 1999, Murphy and Gary Betchan replicated this route. On the southeast slope, they came to cave, barely large enough for four. In July 2001, a team that included Murphy excavated the site under the supervision of Colorado College anthropologist Michael Nowak. They found some charcoal that could have been left by Pike, but no decisive evidence of early nineteenth-century material culture. Given the extensive twentieth-century uranium mining in the area, it is possible that Mt. Rosa once sported other caves since destroyed by human activity.

I’ve retraced the route myself several times on field trips with my students. The funny thing is, I turn them loose right when the

Cave Murphy found on the slope of Mt. Rosa

slope gets especially steep, without telling them about the cave. As they contour back and forth, picking what appears to be the easiest upward route, they find the cave every time. As Murphy says, “the mountain leads you to it.”

Did Mt. Rosa lead Pike to it? It seems probable. Rosa matches more of the journals’ criteria than any other candidate. In fact, at just under eight aerial miles from Pikes Peak, Rosa’s fails only one test, Pike’s estimate of fifteen or sixteen miles to the Grand Peak. Still, Pike, who was quite accurate in recording how much ground he covered, consistently misapprehended aerial distances in his journals. So this seems an easily explainable bit of counter evidence. Moreover, Rosa is less off in this regard than Almagre is and does not require Pike to detour inexplicably to climb a peak like San Luis to the west. There is no peak fifteen or sixteen miles south that matches so many of the other criteria.

To commemorate Pike’s climb, Murphy, the Colorado Springs Gazette writer Dave Philipps, and others organized a climb of Mt. Rosa on November 26, 2006, the bicentennial of Pike’s attempt. The party slept overnight in the cave and honored Pike by getting up the next morning and hiking to the Pike’s Peak, finishing what the hungry explorers had started two-hundred years before.

Coues, Elliott, ed. The Expeditions of Zebulon Montgomery Pike, To Headwaters of the Mississippi River, Through Louisiana Territory, and in New Spain, During the Years 1805-6-7, (3 vols.) New York: Francis P. Harper, 1895.

Sanders, Frank. “The Pike Expedition and the Strange Anglo-American Entrada to the Spanish Southwest.” Unpublished manuscript, 2006.